The personal project “frameS8” is a photographic artwork Martin Bruckmanns developed taking Super 8 films that he has collected over the years as their point of departure.

In the 1935 essay “The Work of Art in the Age of Its Reproducibility” Walter Benjamin wrote that in a film, close-ups and slow motion reveal things that would otherwise only be perceived in the subconscious. By revealing the optical unconscious, the philosopher compares close-ups and slow motion to psychoanalysis, through which we experience the drives and the unconscious.
Martin Bruckmanns’ series “frameS8” consists of just such isolated close-ups and individual frames, revealing the optical unconscious. Thousands of frames are combined to form a film, where the individual images are no longer perceptible as such; the individual motifs and images subordinate themselves to an overarching whole, and the plot dominates the motif. The individual frames impressively show what the viewers could only vaguely see in the film itself. The optical unconscious is first revealed by the process of selection. 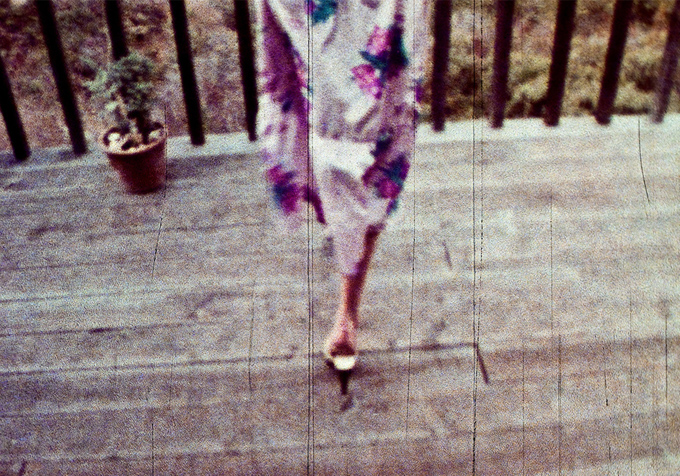 In search of the unconsciously visible, Martin Bruckmanns viewed countless films. In our digital present, this Super 8 material has an unmistakable charm. This is primarily due to the flattering appearance of the films, where everything appears softer and warmer than in a high-resolution video format.
The unmistakable look of the images remains. The discrete charm of Super 8 lies not just in the slightly unfocused and thus friendly images, but also in the melancholy inscribed in them. Martin Bruckmanns found this past age and the melancholy that inheres in it in his photographs, in their colors and haptic structures. From the endless series, he chooses a single frame, moving the scene beyond the moment into the view of the beholder, thus making the optical unconscious emotionally visible. In this way, he adds a microscopic trace of life to the fugacity of film.

Martin Bruckmanns’ analytic gaze on the hidden details in film, the choice of his powerful and yet sensitive motifs, and their subtle fusion, offers the viewer sufficient room for interpretation and reminiscences.

Martin Bruckmanns is born in Cologne, Germany in 1969. He has been taking photographs since the age of eight, when his parents bought him his first camera, a Kodak Instamatic. From that moment on he never puts down the camera, starts as a self-taught photographer and later also experiments in his own darkroom.
After high-school he went to Italy to further his studies at the IED in Turin where he graduated 1996 in Visual Communication. He started to work for some advertising studios first as assistant later as a freelancer for more than two decades.
Currently he focuses more on artistic and fine-art photography developing his own artistic project “frameS8”. His works are in private collections in Germany, Italy and France.